The foaling mare should be taken to the foaling location at least 3-4 weeks before the expected foaling date, so that she can produce antibodies to the bugs present in the environment where the foal will be born as it is these antibodies that will be passed on to the foal in the first milk (colostrum). A large loose box bedded with straw is ideal.

We usually recommend a booster vaccine for influenza and tetanus in the latter stages of pregnancy to ensure high antibody levels to these diseases are present in colostrum. It is also possible to vaccinate for herpes virus and rota-virus if required.

Is she going to foal tonight?!

This is a very difficult question to answer which is made more complicated by the ability of the mare to “hold on” to the foal if she is disturbed and delay foaling. However, there are a few signs that are used to get an indication:-

The majority of foalings proceed easily and excessive interference may cause problems. If possible the mare should be observed quietly from a distance, so that any problems are seen quickly, but without disturbing the natural foaling process.

Stage 1: Positioning of the Foetus

This can last from a few minutes to a few hours, and may be preceded by several bouts of false labour. Signs of abdominal pain and restlessness are often seen, and patchy sweating around the flank and behind the elbows often occurs a few hours before foaling.

Rupture of the allantochorion (“water breaking”) marks the end of stage one.

Usually takes 5-25 minutes. Amniotic membrane appears between the vulval lips as a white, fluid-filled structure. The mare usually has runs of 3-4 contractions, followed by a short period of rest. When the foal begins to appear one front foot usually precedes the other by ~15cm, followed by the head. If possible then observe that this presentation is correct, and ring immediately if you are concerned. Delivery should take no longer than 30mins after the water breaking, and if not the vet should be

called. We recommend that for novice owners the vet is called immediately that 2nd stage labour begins. For more experienced owners that may have dealt with several foalings previously, there is the “15 minute rule”. This means that if there is no progress with 2nd stage labour for 15 minutes, the likelihood is that there is a problem that needs veterinary intervention ASAP.

DO’s and DON’Ts at this stage

DO NOT interfere with delivery if possible.

DO remove any amnion that remains over the foal’s nose to prevent suffocation.

DO NOT pull the foal away from the mare, which may prematurely break the umbilical cord

DO dip the foal’s navel after the cord is severed. We normally use a 50:50 mixture of hibiscrub and surgical spirit 3-4 times during the first 24 hours.

Passing of the foetal membranes (AFTERBIRTH) normally occurs within 2-4 hours. Membranes not passed within 3-6 hrs are considered retained, and are potentially serious to the mare and the Vet should be called. Once passed it is worth keeping hold of the placenta so that it can be examined by the vet. 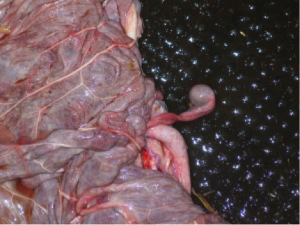 Placenta must be checked for completeness

Looking after the foal

The umbilical cord usually breaks within 15mins. Attempts to sever the cord manually are rarely warranted and can cause serious problems. If there are any concerns the Vet should be called. 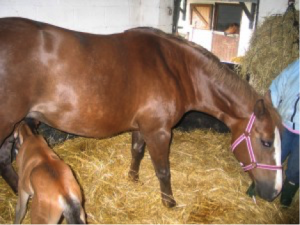 Picture. Foal must suck within 6 hours of birth

It is vitally important that the foal drinks at least 1.5 litres of colostrum within the first 6 hours of birth. The antibodies in colostrum can only be absorbed by the foal for the first 12-24 hours of their life so if this opportunity is missed severe immune problems can result. Patient and firm handling of both mare and foal is sometimes needed to ensure that suckling occurs.

Due to the consequences of not ingesting enough colostrum we recommend a blood sample be taken from the foal at 18-24 hours old to ensure enough has been absorbed. This can be tested extremely quickly, and if levels are insufficient it is necessary to give intravenous plasma to increase antibody levels. An examination of the foal is also a good idea at this point to look for any problems such as cleft palates, heart murmurs or limb deformities.

Foaling can be a very enjoyable and rewarding experience, albeit one that is frequently quite stressful! Good preparation will help ease this stress, but remember we are always only a phone call away.