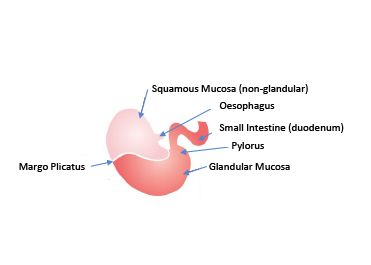 Clinical Signs your horse might have Gastric Ulceration
The clinical signs for Gastric Ulcers can be commonly seen in horses and are often very subtle. Unfortunately, this can mean they are not always diagnosed straight away. The clinical symptoms shown can vary dramatically between types of horses, but the common signs can include:
• Poor appetite
• Colic signs.
• Weight Loss
• Dull coat
• Poor body condition
• Poor performance
• Behavioural changes especially aggression.
• Discomfort when touching flanks or when tightening the girth
• Ridden issues: Bucking, rearing or head-tossing.

How do we diagnose Gastric Ulcers?
Due to the vague clinical signs of gastric ulcers, the only way we can accurately diagnose ulcers is by endoscopy (gastroscopy) – which is passing a camera up the horse’s nostril, down the oesophagus and into the stomach to view the lining of the stomach. The horse must be starved overnight as food in the stomach can make it impossible to see the lining. Our gastroscope is 3m long to ensure we can reach the stomach and view all parts of it, often including the duodenum (start of the small intestine). It is worth noting, although the gastroscopic is not painful, it is routine to sedate your horse to ensure they stay calm and as relaxed as possible.
Ulcer Grading
Ulcers are found most commonly within the squamous mucosa (see diagram above) but can be found within the glandular mucosa. Ulceration may be graded on a scale of severity from 0-42 in the case of squamous ulcers.
Pyloric ulcers are generally descriptive although this may be combined with a grading system 0-4 to indicate the severity and any changes from the last ‘scope.
Gastroscopy aftercare
Immediately after your horse’s gastroscopy, your horse will still be sedated and should be moved to somewhere calm and familiar; ideally their stable. It is likely they can be given immediate access to water (consult with the vet) but they should not be given access to any food for at least two hours, or until they are fully awake. Your horse may be sweaty and my pass more urine that normal, but this is a normal side effect of the sedative drugs used.
How are Gastric Ulcers treated?
Often changes in management and/or feeding are required when gastric ulcers have been diagnosed (see ‘Can Gastric Ulcers be prevented’).
The drugs commonly used are
1. Omeprazole. Gastrogard is the usual oral medication and has the highest amount of buffers to help protect it against the acid in the horse’s stomach. It MUST be given on an empty stomach (starved from 10pm overnight) before waiting 30-60 minutes before feeding. Injectable omeprazole may also be used intramuscularly.
2. Sucralfate. This helps protect the lining of the stomach by acting as a barrier and so preventing the ulcers, particularly in the pylorus.
3. Misoprostol. This helps prevent ulcers by acting against inflammatory substances in the stomach lining. However, this is a drug that is toxic to humans and so must be handled with care on the yard especially whilst feeding.
What are the risk factors associated with Gastric Ulcers?
• Increases in intensity of work.
• Transportation to and from events.
• Changes to routine.
• Erratic feeding or irregular eating habits.
• Periods of illness/having had an operation.
• Some medications.
• Extended periods of box rest.
Can Gastric Ulcers be prevented?
You can help by reducing the potential that gastric ulcers develop by:
• Feeding smaller amounts of food but more frequently to help neutralise the stomach acid.
• Allowing ad-lib access to grass/hay/haylage (speak to one of the vets for advice on this).
• Double netting/splitting hay into more, smaller nets
• Dietary changes
o Reducing the amount of high carbohydrate diets (low sugar).
o Increased oil
• Stress reduction (mirrors, access to other horses, toys etc.)
• Treatment with medication before a potentially stressful event e.g. travel (speak to one of the vets about this).

Additional Notes
We often recommend feed such as Saracen’s Relieve which is generally very palatable as a general feed or Equi-Jewel which is rice-bran as a weight gain food.
Supplements such as gastric Comfort (Feedmark) which contain Magnesium Hydroxide, antacids and pectins are also helpful.
Turmeric (curcumin) along with oil and black pepper has also been reported as helpful although there is no evidence to support this.

This website uses cookies to improve your experience while you navigate through the website. Out of these, the cookies that are categorized as necessary are stored on your browser as they are essential for the working of basic functionalities of the website. We also use third-party cookies that help us analyze and understand how you use this website. These cookies will be stored in your browser only with your consent. You also have the option to opt-out of these cookies. But opting out of some of these cookies may affect your browsing experience.
Necessary Always Enabled

Any cookies that may not be particularly necessary for the website to function and is used specifically to collect user personal data via analytics, ads, other embedded contents are termed as non-necessary cookies. It is mandatory to procure user consent prior to running these cookies on your website.